In essence the benefit is very simple to grasp - sensors that allow readout from several (2, 4) TAPs generate more data throughput, which increases the amount of frame rates collected from the camera, thus making it faster.

CCD sensors in particular do not permit read out at just any random speed. Due to the digitalization of different types of image information via central A-D element, the demands placed on electronics are high.
Pixel clock of modern CCD sensors ranges from 20 to 75 MHz.
Whole frame is basically divided into two or more regions by the multi-tap CCD structure.
Because of this to achieve higher frame rates, certain area scan camera sensors are "tapped" several times for accelerated readout. Two or four sensor portions (taps) are clocked out in parallel
The signals are evaluated via two or more different A-D converters and transmitted separately.
For such a structure each sensor tap requires a so called analog-to-digital converter (ADC), with its own dedicated amplifier. 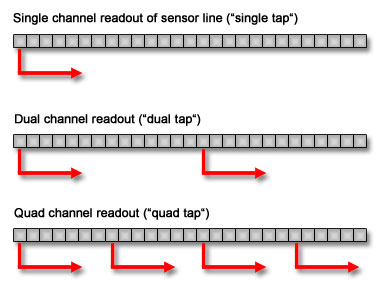 Note: This is just for simplistic illustration, readout is actually done from 4 corners of the picture and is far more complex.


So far On Semiconductor (technology from former Truesense, former Kodak) was known for particularly fast speed of their CCD sensors (like KAI-4021, KAI-4022, KAI-11002, KAI-16000 etc.) and cameras based on them.
However Sony has intensified the efforts and developed new line that provides readout options with 1, 2, 4 taps (Quad tap).
XIMEA uses 4 models of sensors from the line, in particular: ICX674, ICX694, ICX814, ICX834 with USB 3.0 interface.

It is possible to implement different methods of tap matching, which is why quality of resulting image can differ remarkably. Most of the camera vendors offering mentioned sensors do not use multi tap option working only with single tap, or have inferior image quality.
To ensure perfect contiguity and overall coherence of the whole image, XIMEA uses special calibration tools to receive highest level of tap matching under conditions covering broad range of gain or different temperature ranges.
XIMEA cameras utilizing multi-tap sensors also capitalize on the USB 3.0 interface and its bandwidth (5 Gbit/s) to harness data provided by all of the available taps exploiting full potential of the sensor and reducing blur in targets moving at high-speed.
Examples of XIMEA speed and cameras from vendors using same sensors:

Additionally to the multi tap technology new Sony sensors offer so called EXview HAD CCD II technology. What does it do?
Major differentiating points of CCD sensors that feature this technology and that don't are:

Especially in lower light situations - you do not have to increase the camera gain to get lighter image. This results in reduced noise.

While it is important to have fast cameras there is another critical factor in the industrial imaging sector - Timing.
In applications from areas of factory inspection or speed enforcement in traffic systems, if there is no accuracy in exposure, the final image that is influenced even by just few milliseconds of capturing the moving object is basically worthless.
Such differences could be designed in the system, but software or hardware trigger input is not always constant.
Quality machine vision cameras are developed to be capable of receiving input triggers such as TTL or optically isolated triggers combined with a variety of software triggers, guaranteeing enough options to choose from for a system to be reliable.
Furthermore, configuration of strobe duration, strobe delay variables and exposure delay, will match exposure with the top intensity of different lighting types, which have diverse luminance output curves.

Consistency and reliability is the key for B2B customers in different sectors and Machine Vision takes it to extreme.
XIMEA uses LED and high grade oscilloscopes in testing of different types and camera models to ensure accuracy under 1 microsecond (<1us). TTL output has typical delay of 10ns.