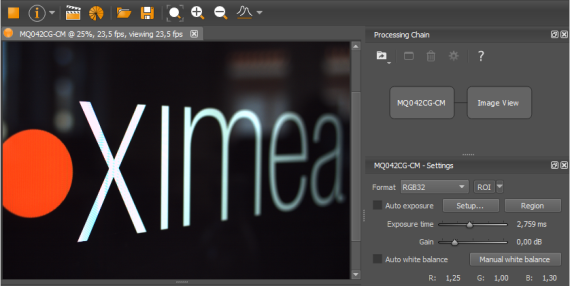 Please follow Quick Start Guide to understand the Software options and start working with the camera.

Currently not all parameters are supported in xiAPI for xiB camera models.
We are working on implementation of other parameters. Please check xiAPI PCIe Cameras Limits.

The CamTool is a cross-platform viewer application which is capable of setting basic camera parameters, controlling certain features, displaying the video stream and saving snapshots and sequences.
Further, the program can be extended with custom functionality using its plugin infrastructure.
CamTool is based on Qt for the UI and xiAPI for the camera control.
The CamTool’s camera settings menu resembles the parameter set of the xiAPI.

Although the aim is to support all common xiAPI and sensor features for the xiB camera, some of those features are still being implemented and will be offered to users via a software and/or firmware update. The list of planned features includes: