XIMEA: To underline the advancements we use only the most modern sensors together with top notch components (like FPGA) for our line of cameras taking the full potential of the sophisticated technology.
That means high-resolution CMOSIS sensors and other fast speed CMOS which have big pixels and are all equipped with Global shutters.

The predecessor of PCI 3.0 being immensely popular provides a platform of support and acceptance which is easy to build on.
Vendors of hardware and software are ready to provide all necessary solutions to progress the utilization of the interface.
Motherboards, chipsets, host controllers, cables or operational systems – everyone is on board.
This also ensures an easy switch from PCI 2.0 and other interfaces to PCI 3.0. 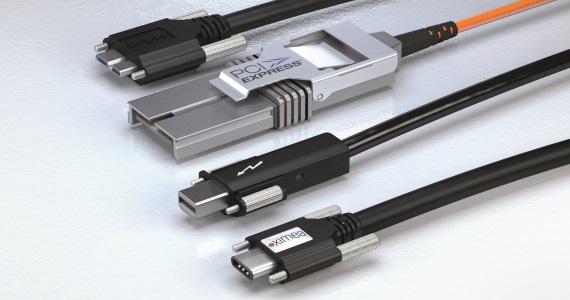 Among other improvements, PCI 3.0 achieves multiplication of PCIe 2.0 communication speeds through various architecture and protocol management optimization, with a theoretical transfer rate of 64 Gbit/s.
The effective bandwidth is around 7000 MByte/s which is up to 17 times faster than USB3, 7x than 10GigE and even faster than Camera Link HS or CoaXPress.
A successor is underway called PCI 4.0, which will provide up to twice the speed thus easily surpassing anything on the market.
All this speed requires appropriate hardware – chipset, motherboard, host adapter, cables and you can learn more about it HERE.

XIMEA: In regards to speed we push the pedal to the limit having the fastest 12 Mpix camera model that streams 333 fps at full resolution.
Where others claim to have incredible speed with 2Mpix at 141/340 fps, XIMEA delivers 2500+ fps or 3500+ fps with 1 Mpix.

PCIe technology due to mentioned popularity and modernization factors also allows the use of new, smaller components (FPGA) and one device needs fewer of such already small components overall.
This results, besides other benefits, in a more compact size of footprint and of course also lighter weight which are parameters important in mobile applications and miniaturization trend.
Affected are also accessories like lenses or cables that are getting smaller as well, making it easier to design robust applications and sturdy housings or enclosures.
Size is further reduced by removing the need for intermediary equipment like for example Frame grabbers – you can forget about them for good.

XIMEA: Where you need a small size, XIMEA is your extreme measure. Last resort when everyone else is too big – currently oriented on Embedded vision systems and Deep Learning.
We produce the smallest fast speed cameras worldwide (60x60x38 mm, 175g) and are able to provide special OEM customization services which would reduce the footprint and increase robustness further.

In summary, each of the mentioned factors helps to reduce the cost of the final product, but customer’s savings with switching to PCIe will not stop with the camera.
Removing the Frame grabber and unnecessary software intensifies the payoff process which continues with using fewer cheaper cables as well as new, cost effective EF-mount active lenses.
Add to the equation the simplified Integration efforts and DMA (Direct Memory Access) architecture and you realize the full range of overall system cost reduction.
While doing such calculations you need to keep in mind a given - that initially price of PCI 3.0 camera is lower than equivalent competitive CoaXPress or CameraLink models.

XIMEA: Another simple truth is that price is certainly not everything and sometimes cheap is too cheap, which is why XIMEA is not interested to engage in price wars.
This being said, we always try to help smaller startups and advice different OEM companies regarding optimal options and reliable solutions. Just ask our info@ximea.com

There are many new applications where PCI 3.0 can and will be used because of its advantages like compact size and suitability for multiple camera setups and embedded vision or the possibility of GPU compression.
In fields like 360 panorama, Aerial or city mapping, Sports or Entertainment broadcast, Autonomous vehicles or Solar panel inspection.

Why PCI Express ? Because XIMEA¶